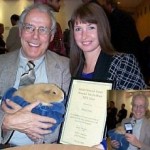 Peter Gurney collecting an award at Great Ormond Street Children's Hospital for having visited children for 10 years with his guinea pigs
The A to Z of Guinea Pig Care was written by my dear friend and “Guinea Pig Guru” Peter Gurney.

I met Peter over 20 yrs ago. At that time I was living in London, England.
One morning in 1992, I was on a subway train. I noticed this man sitting close to me and had a shopping basket on his lap. When I looked closer I noticed that there was a beautiful, well groomed Peruvian Guinea Pig in that basket. I asked him what on earth he was doing in the subway with a guinea pig in a basket. He told me that he had just returned from his weekly visit to the “Great Ormond Children’s Hospital”

Needless to say, we became good friends, and I spent many a happy hour visiting Peter and his piggies in his South London flat. I don’t believe in “chance meetings” and this meeting is a great example of that. When I moved to LA and started my guinea pig rescue I relied on Peter for support and advice.

Peter Gurney’s A to Z of Guinea Pig Care is as relevant now as it was then and I have proudly published it on this website for all.

In 1992 he was diagnosed with kidney cancer, and, during his initial recovery, wrote his first book, The Proper Care of Guinea Pigs, taking all the photographs himself. Gurney wrote a number of other books, including The Sex Life of the Guinea Pig, which he promoted on a tour of the United States.

In 2006 he was advised that his cancer had returned and was incurable. He made arrangements to find new homes for his guinea pigs, 40 of whom survived him, before his death at age 68. His final book, Last of Their Kind, was released posthumously in April 2007.

Gurney wrote several books on the health, care and welfare of guinea pigs. He toured the USA to promote The Sex Life of Guinea Pigs.