We were supposed to go in, load up and head back but ended up staying two days.
It is hard to describe what went through my head when I arrived at the property and seeing that many guinea pigs.  I had been told that there were 150, possibly 200. Gabe, my wonderful and supportive husband thought we could just load them all up into boxes and into the horse trailer we brought then sort, sex and treat the guinea pigs once we got back to  the ranch in Los Angeles, but as we walked around this property our hearts sank. After all of 10 minutes we realized that this was going to be the largest documented rescue of guinea pigs in the USA and not at all as simple as we had thought it would be.
Once we got back to the ranch with all the females, after an exhausting 14 hour drive, many wonderful volunteers were waiting to unload the boxes and prepare horse stalls. We put the pregnant females in cages and the girls that were not showing yet were placed in the warm and comfy stalls with plenty fresh hay, water and tons of veggies. It took them a little while to figure out that Romaine and Parsley were good eating, they were fed a diet of raw potatoes and low grade pellets and probably never had any good quality greens.
We always used to think that raw potatoes were toxic and piggies would die eating those. Well  I saw them fighting over a bag of potatoes after it was put down on the floor. Pandemonium broke out and guinea pigs appeared from absolutely everywhere and started gnawing through the plastic to get to the raw potatoes, they were starving and it looked like this was not their first potato party.

The first babies were born that very first day and babies continue to be born daily. Aside from a few days here and there with no births we have had newborns pop up every single day for the past 7 weeks.  Guinea pigs have an 8 week gestation period and we are going to see babies born daily till approximately December the 13th as that will mark 2 months since we rescued the them.  It is then that we will do an official count of the total impact and total number of babies born.
We had lots of help from Wee Companions in San Diego, Piggypoo in Arizona, Bunny Bunch in Montclair and BUNS in Santa Barbara. All four of these rescues have taken in pregnant sows from this lot and that helped us so much! We will be getting their total tally of babies born next week as well and will be releasing the tally then. A bunch of former adopters stepped up to foster some of these pregnant mommies as well. Thank you!
We finally have the ringworm under control. Many of the pigs had a bad infestation that required baths and daily creams. It was quite overwhelming and medicating in the early weeks took about 4 hours a day. We have the feeding down, we cut up veggies and put those in big buckets that we then serve. Feeding these days is quite a spectacle and a very noisy affair, hahaha.  We make numerous trips to the restaurant supply warehouse to buy cheaper veggies in large bulk lots.
We bought a large 2nd hand commercial fridge with donation money to keep those greens from spoiling.
We were a little famous for a little while. The rescue was featured on the local news, ABC7 sent a crew to do a story. The Dodo contacted us and released a video of the rescue. Many people do not know that such a thing as guinea pig rescue exists, The Dodo and ABC7 helped spread the word.

Adoptions have been great so far. Many people saw us on the news and made appointments to adopt instead of buy from a pet store making us and the piggies so very happy! We just have started neutering some of the oldest young males and hope to have some ready for adoption in 10 days or so.
All adopters are educated about proper guinea pig care and we also make sure that all guinea pigs that are adopted get to live in appropriate cages. We provide lifetime support, free health checks and nail clips for all guinea pigs and make people sign a contract that states that in the event they cannot keep their guinea pigs they understand the pigs have to be returned to only us. 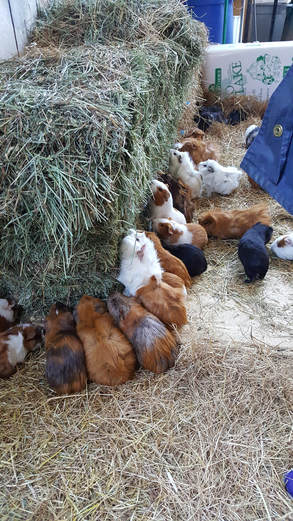 We received such an outpour of love and support the first few weeks, it was extremely touching and more than once put tears in my eyes. We received cash donations, people bought items of our Amazon wish list and some of you sent checks in the mail. I know how hard folks work for their money and I keenly feel that trust and responsibility to spend those donations for these guinea pigs wisely and frugally. We received an emergency grant from the wonderful ASPCA that will be put to great use to help feed and house these sweet deserving guinea pigs. We honestly would not have been able to help these pigs if it wasn’t for all this support, the bills so far have exceeded tens of thousands of $’s and we have still do not have all the funds we need to see this through.

Oxbow, Kaytee and Small Pet Select donated pellets, Chewy.com donated supplies. Thank you so much for stepping up!! And we are the Small Pet Select "Rescue Heroes" 2017 in the small independent rescue category and won $2,500 for the Norcal piggies.

But we are not there yet. There are over 300 male guinea pigs  that remain on the property still. Local animal control is making weekly visits to check up on those boys and to bring some of the supplies we donated and sent to animal control. So at least those boys are eating better and have clean water bottles now. Dismas from Portland Guinea Pig Rescue is thankfully coordinating a transfer of some of those left behind.  There were some offers from other organizations in the area to take in some but nothing concrete yet. So basically they have nowhere to go right now. We are hoping that we can go back soon and load up our trailer once more but that all depends on funds and space. We need many more adoptions and more donations if we want to commit to bringing them to safety. Can you help?

Much love
The Piggies